For many visitors  their tourist adventure in Poland start at one of the main cities; however our mountains often comes as a second destination. There are several mountain ranges in Poland, all located in the Southern part of the country. They are, from West to East, the Sudeten (Sudety), Beskidy, Tatras (Tatry), Gorce, Pienins (Pieniny), and the Bieszczady Mountains. North of Beskidy Mountains is the Gory Swietokrzyskie range. All of these mountain ranges, except for the Sudeten and Gory Swietokrzyskie, belong to the Carpathia Mountains (Karpaty), which extend from West to East and form a natural southern border of Poland. 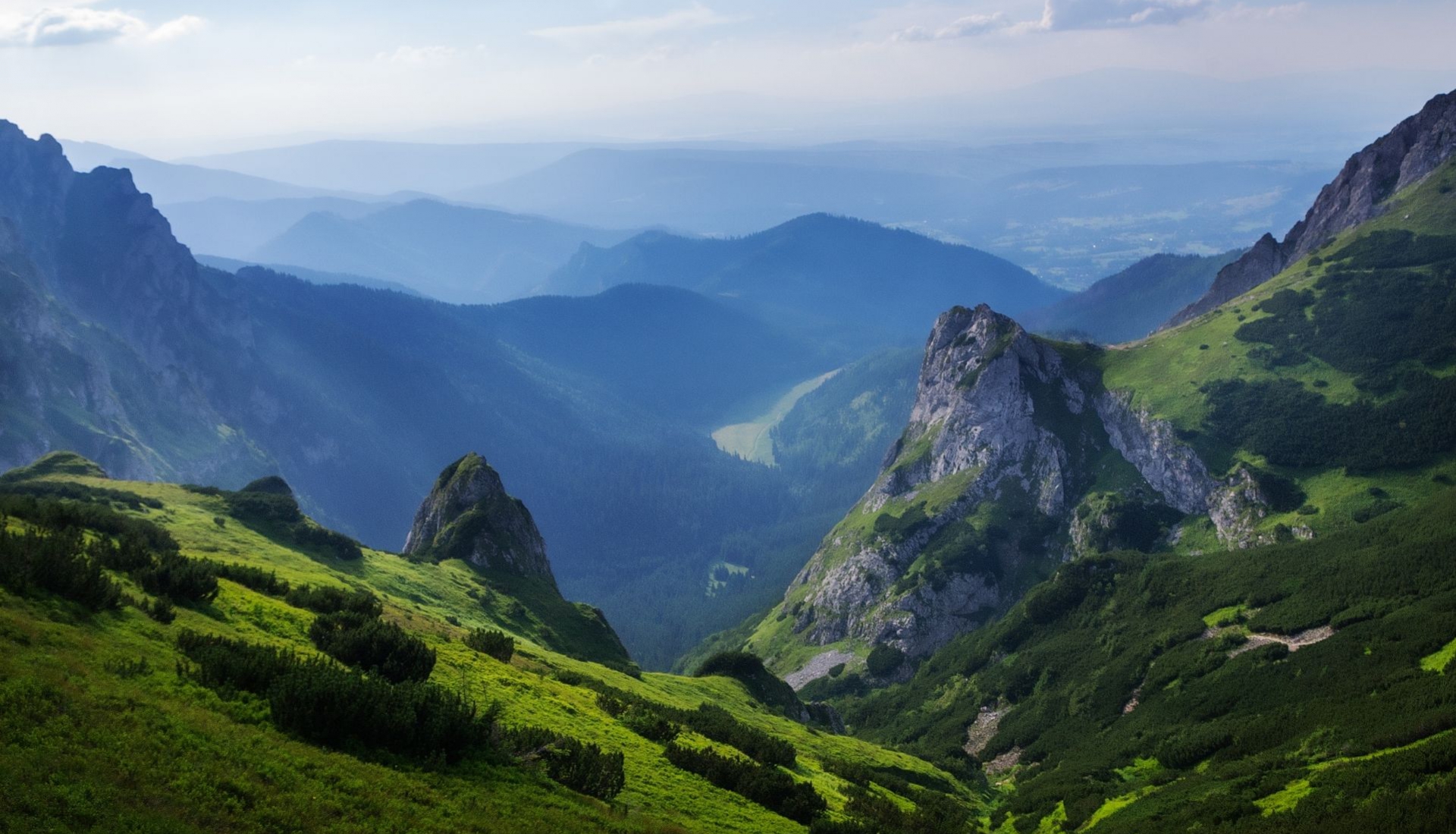 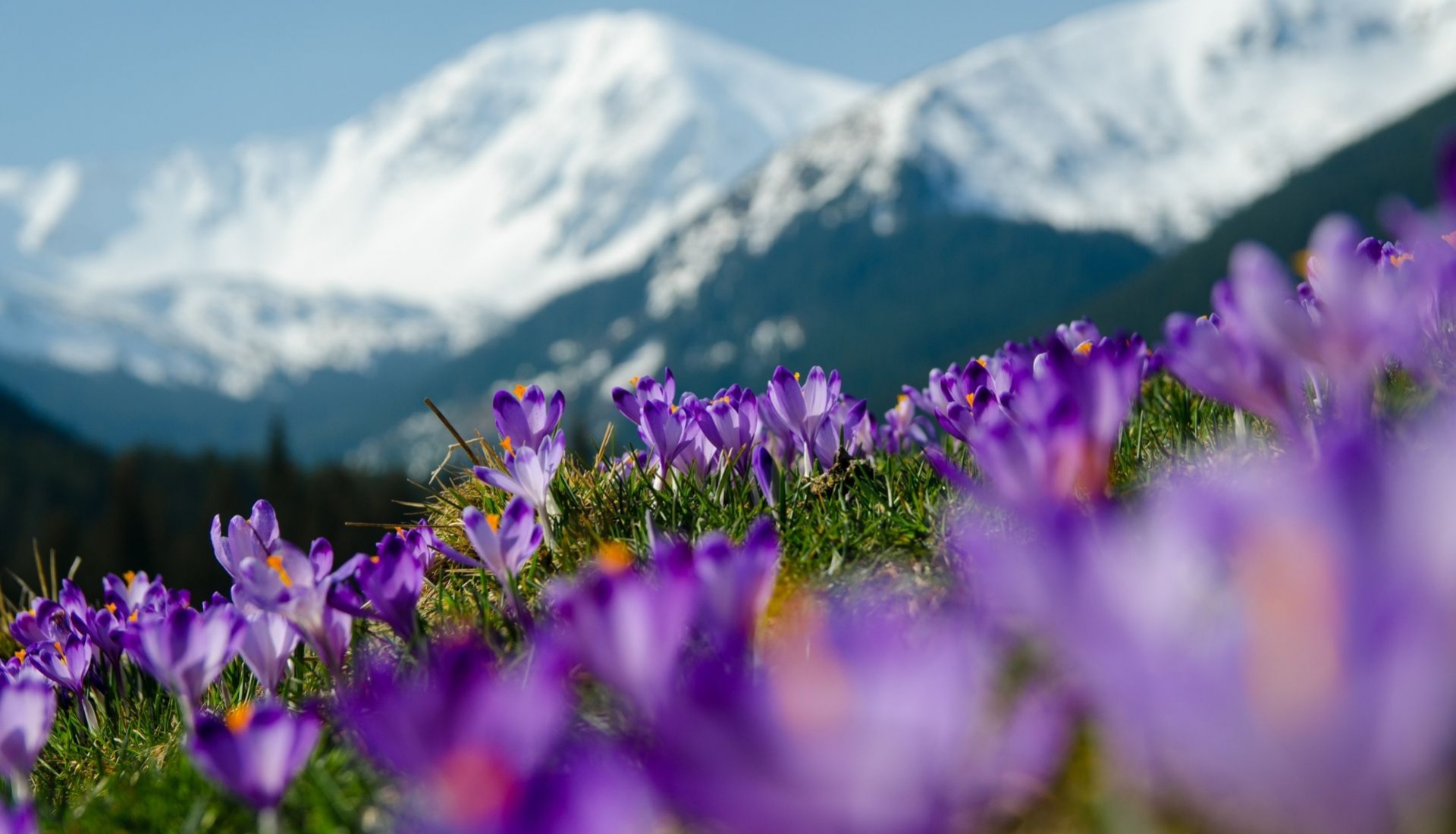 Probably the most famous between tourists are a mountain range that form a natural border between Slovakia and Poland. They are the highest mountain range in Poland.

The Tatra National Park covers one of the two Alpine mountain ranges in Poland. The Polish Tatra range, which is a part of the Western Carpathian Mountains, is divided into two sections: the High Tatras (Tatry Wysokie) and the Western Tatras (Tatry Zachodnie). The landscape consists of sharp-edged peaks and hollows with numerous rock formations.

There are around 650 caves in the park, of which the Wielka Śnieżna cave system is the longest – 18km (11mi), and the deepest (maximum depth 814 metres (2,671ft). Six caves of this system are open to public. 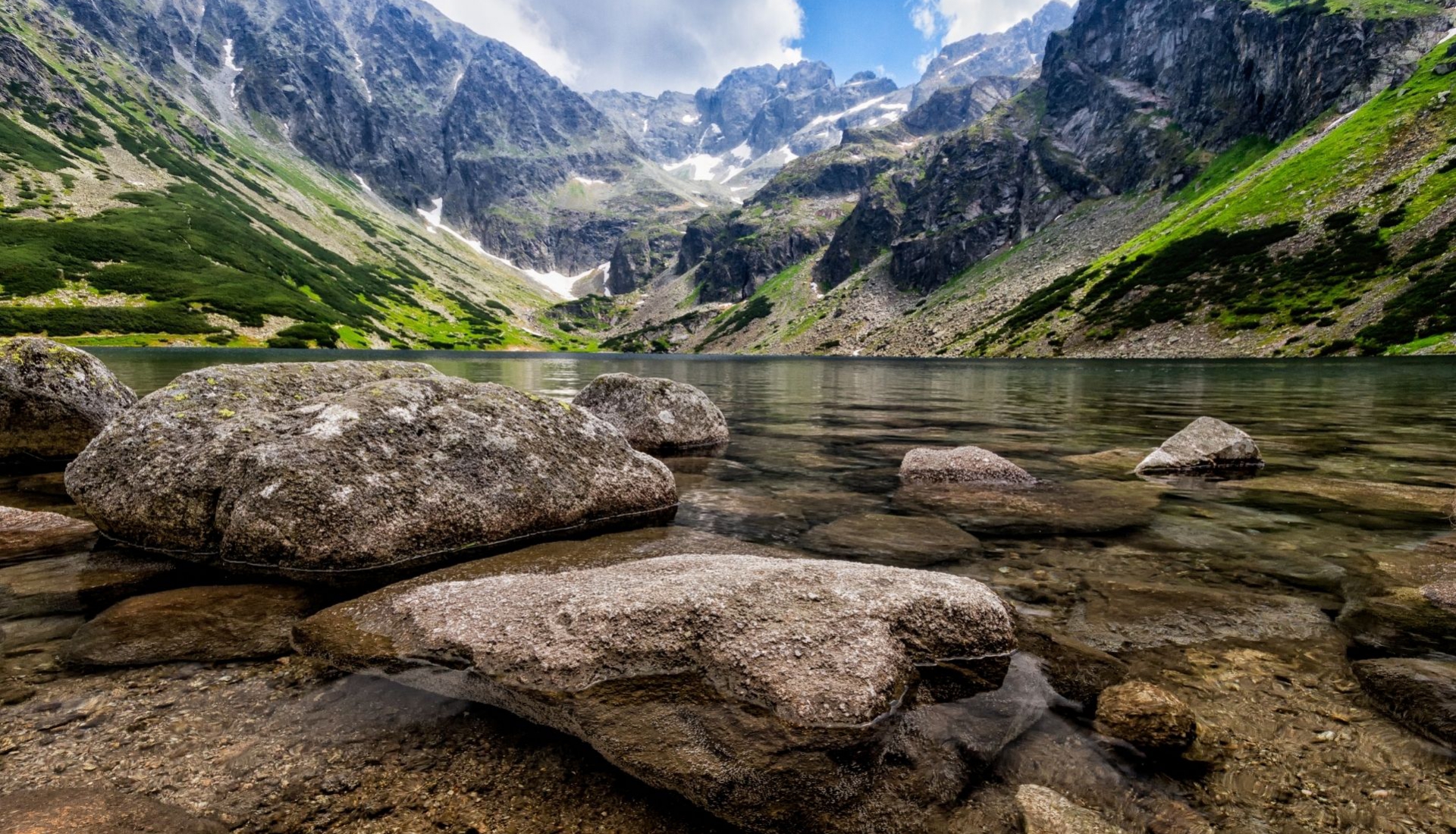 Bieszczady is a mountain range that runs from the extreme south-east of Poland through Ukraine and Slovakia. Frequently Bieszczady refers only to the Western Bieszczady or even only to the part of the range lying within Poland. Most of the Polish range is covered by a Bieszczady National Park.

Currently Park occupies an area of 292.02 square kilometres (112.75 sq mi), covering the highest areas of the Polish part of the Bieszczady Mountains. In 1992 the Park and its surrounding areas became part of the UNESCO East Carpathian Biosphere Reserve. 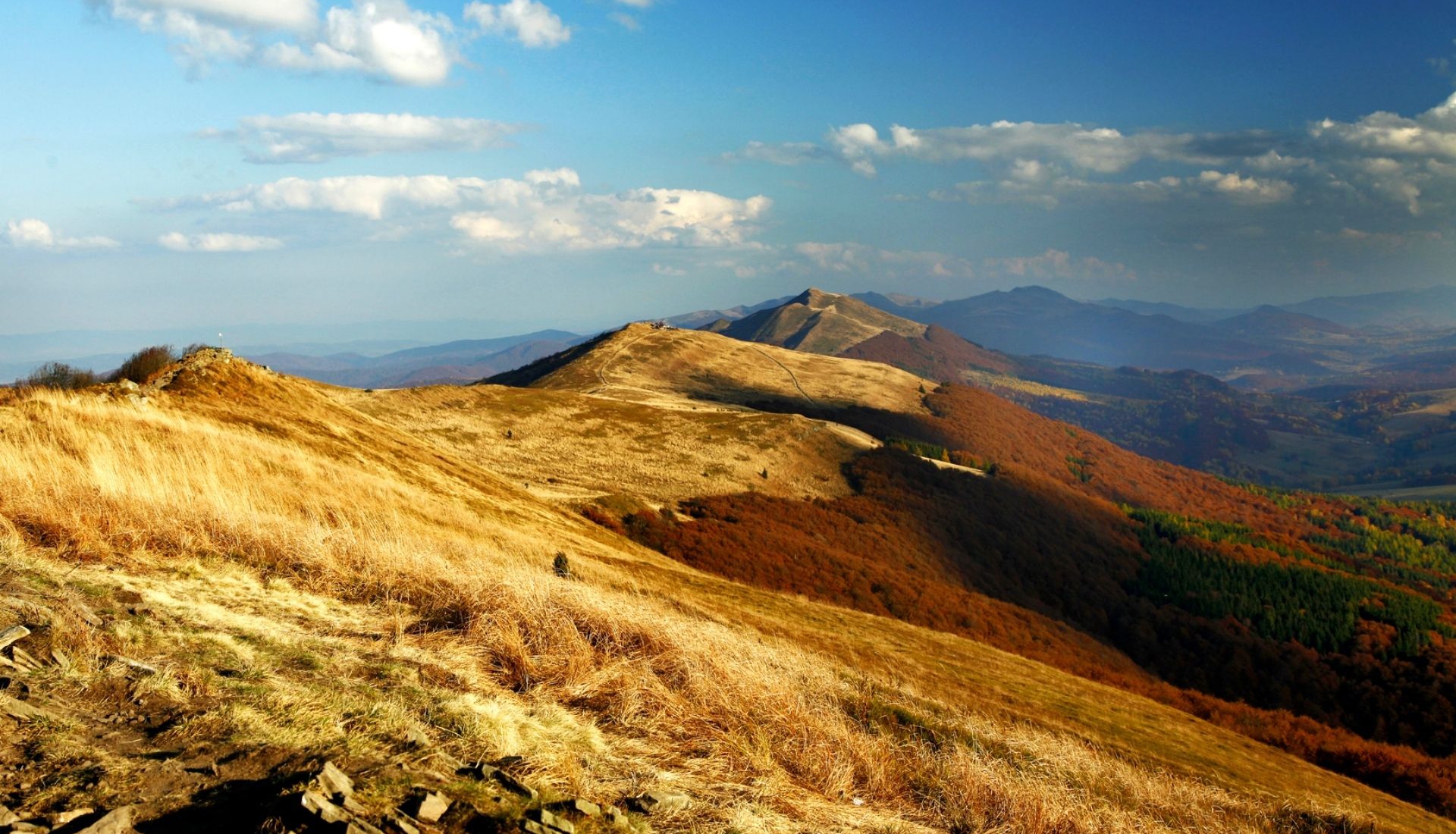 Forest cover about 80% of the area of the National Park. The woods are mainly natural and in some cases it can be said that they have preserved their pristine character. The highest peak in the park, Tarnica, is 1,346 metres (4,416 ft) above sea level. Animal life is abundant with several species of endangered animals thriving in the area, among them bears, wolves, wildcats, wild boars, beavers, otters and lynxes as well as deer, moose and European bisons (of which around 100 live in the area). The Park also contains interesting bird species, including eagles and owls, and is home to the largest Polish population of Aesculapian snakes.

The area of the Park is sparsely populated (less than 1 person per km²), which means that animals can roam freely. The region is very popular among tourists, but there are not many facilities in the area. Around 70% of the Park’s area is regarded as strict preserve, which means that the use of trails is restricted. The Park’s authorities promote walking trips. 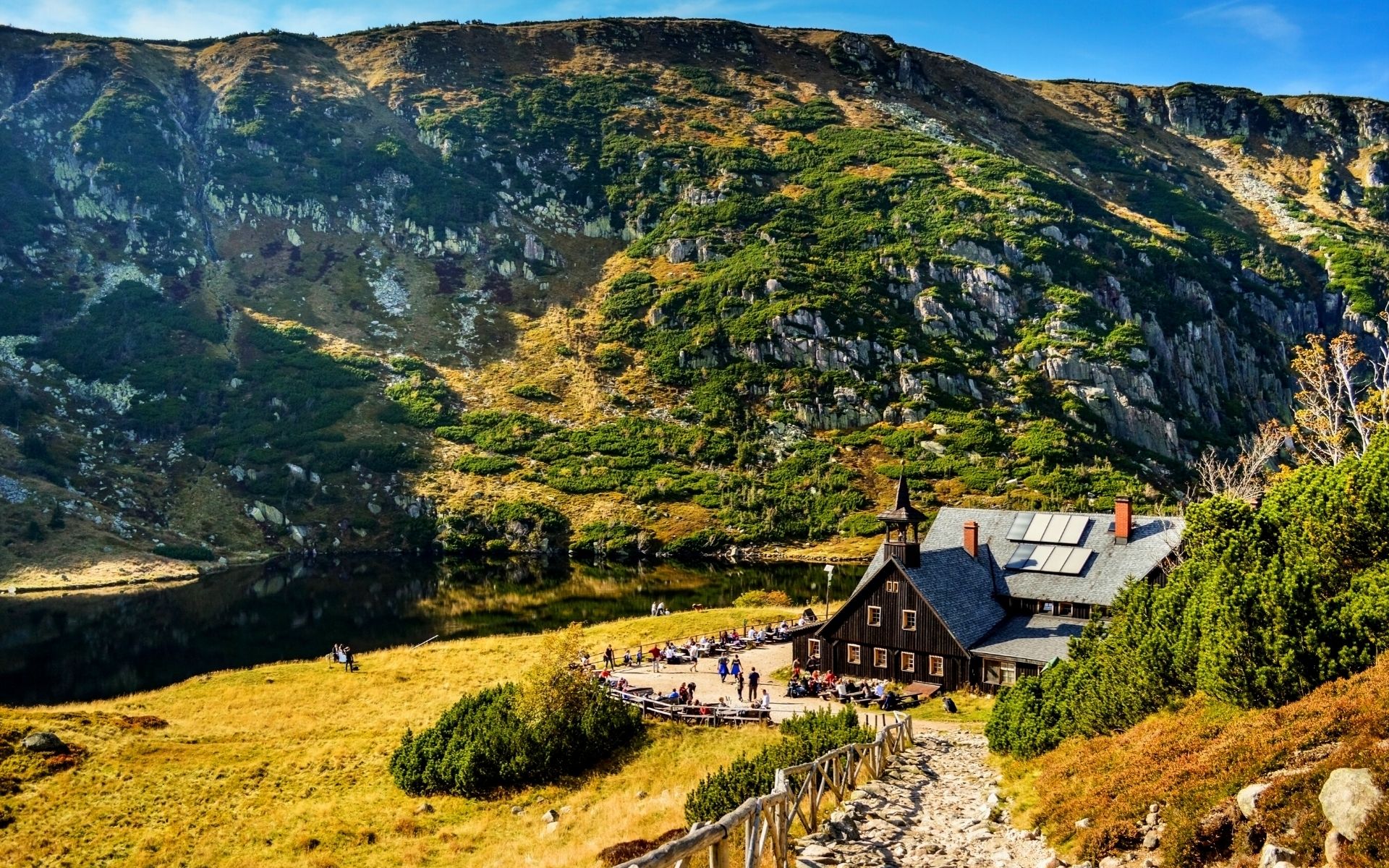 The National Park in the Karkonosze – Mountains in southwestern Poland, along the border with the Czech Republic.
The park is located in Lower Silesian Voivodeship, in the highest part of the Sudetes. It was created in 1959 to cover an area of 55.10 km². Today it is slightly larger at 55.76 km2 (21.53 sq mi), of which 17.18 km² is strictly protected. The majority of the park area, around 33.80 km², consists of forests. In 1992 Karkonosze National Park, together with the neighbouring Czech National Park, became part of the Krkonose / Karkonosze biosphere reserve under UNESCO’s Man and the Biosphere (MaB) programme.

There are about 100 various birds living in the park, the most numerous of animal species living there. In the higher parts of the mountains there are fewer species of them; in the lower levels there are 100 varieties, but in the peaks there are not more than 10. The park has four species of fish, six species of amphibians, and five species of reptiles. The park’s attraction are mouflons, brought here at the beginning of the 20th century.

Karkonosze National Park is visited by more than 1.5 million tourists yearly. They can use 112 kilometres of walking paths, 10 ski lifts and 12 guest houses. The Park has its headquarters in the town of Jelenia Góra.

The highest peak is Śnieżka at 1,602 metres (5,256 ft) above sea level, forming a triangle with (similarly sounding) Śnieżnik, 1,424 metres (4,672 ft), as well as Ślęża peak, further apart. They are connected by a red hiking trail only for qualified tourists. Śnieżka is unique in its rounded, treeless cap, which stands in sharp contrast to other, lower peaks.
One side of the mountain is in the Czech Republic; the other belongs to Poland. The area is very popular in summer with tourists from the Czech Republic, Poland, and Germany, who enjoy hiking in the alpine environment unique to this area. On the Polish side a disc-shaped observatory with a weather station and restaurant was built in 1974, and the St. Lawrence Chapel. On the Czech side are a post office, and a chairlift station, connecting the peak with the town of Pec pod Sněžkou at the base of the mountain. 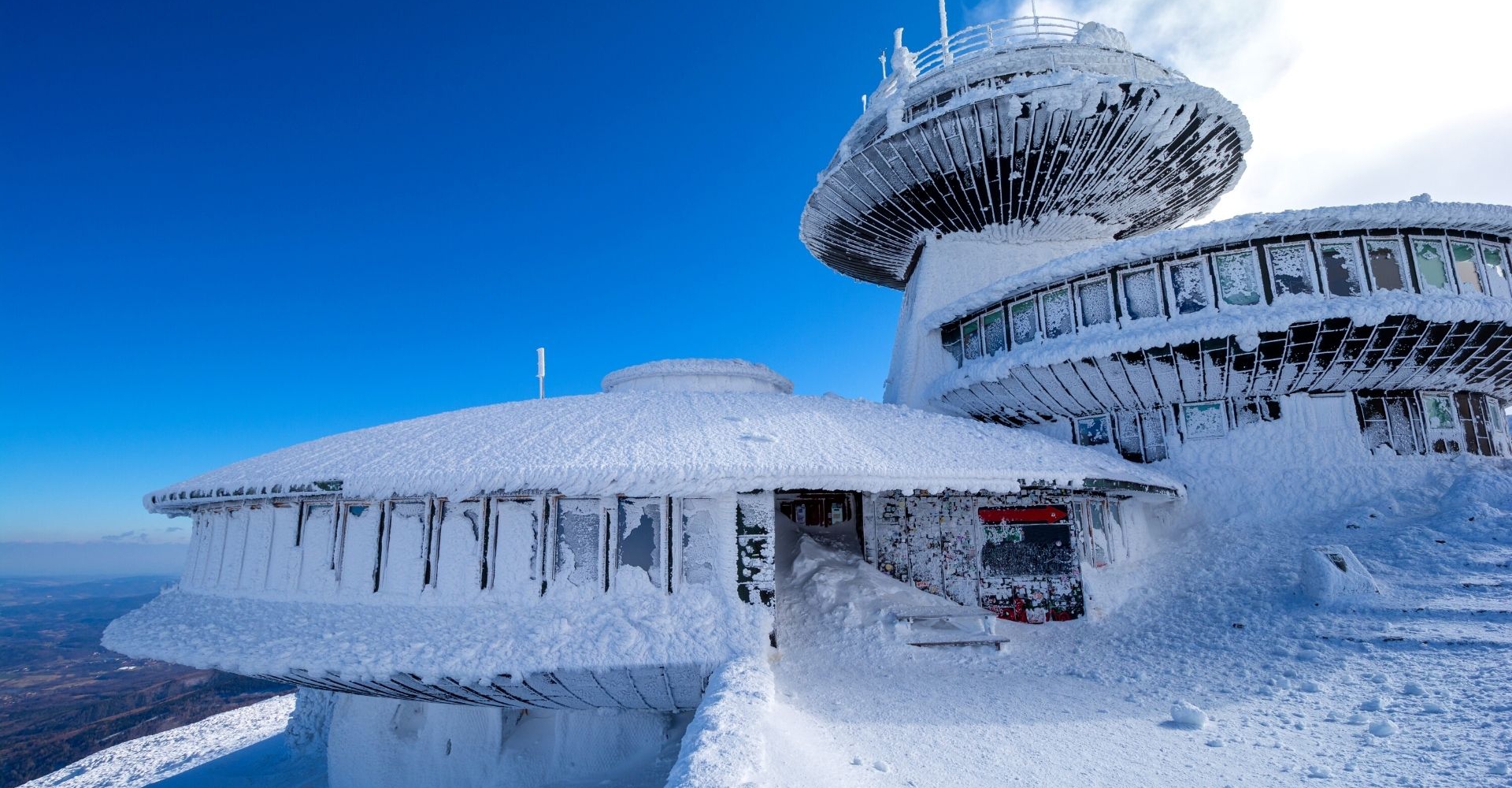 The highest peak of the range is Szczeliniec Wielki at 919 m (3,015 ft) a.s.l. The range is formed of sandstone and, as the only one in Poland, presents plated structure with sheer mountain ledges. Among the tourist attractions there are two massifs: Szczeliniec Wielki on which the labyrinth, and Skalniak on which the labyrinth Błędne Skały (Errant Rocks). There are several notable rock formations, among them Kwoka (“Hen”), Wielbłąd (“Camel”), Małpa (“Monkey”), Głowa Konia (“Horse Head”), Fotel Pradziada (“Great Grandfather’s Armchair”).

Pieniny is a mountain range in the south of Poland and the north of Slovakia. 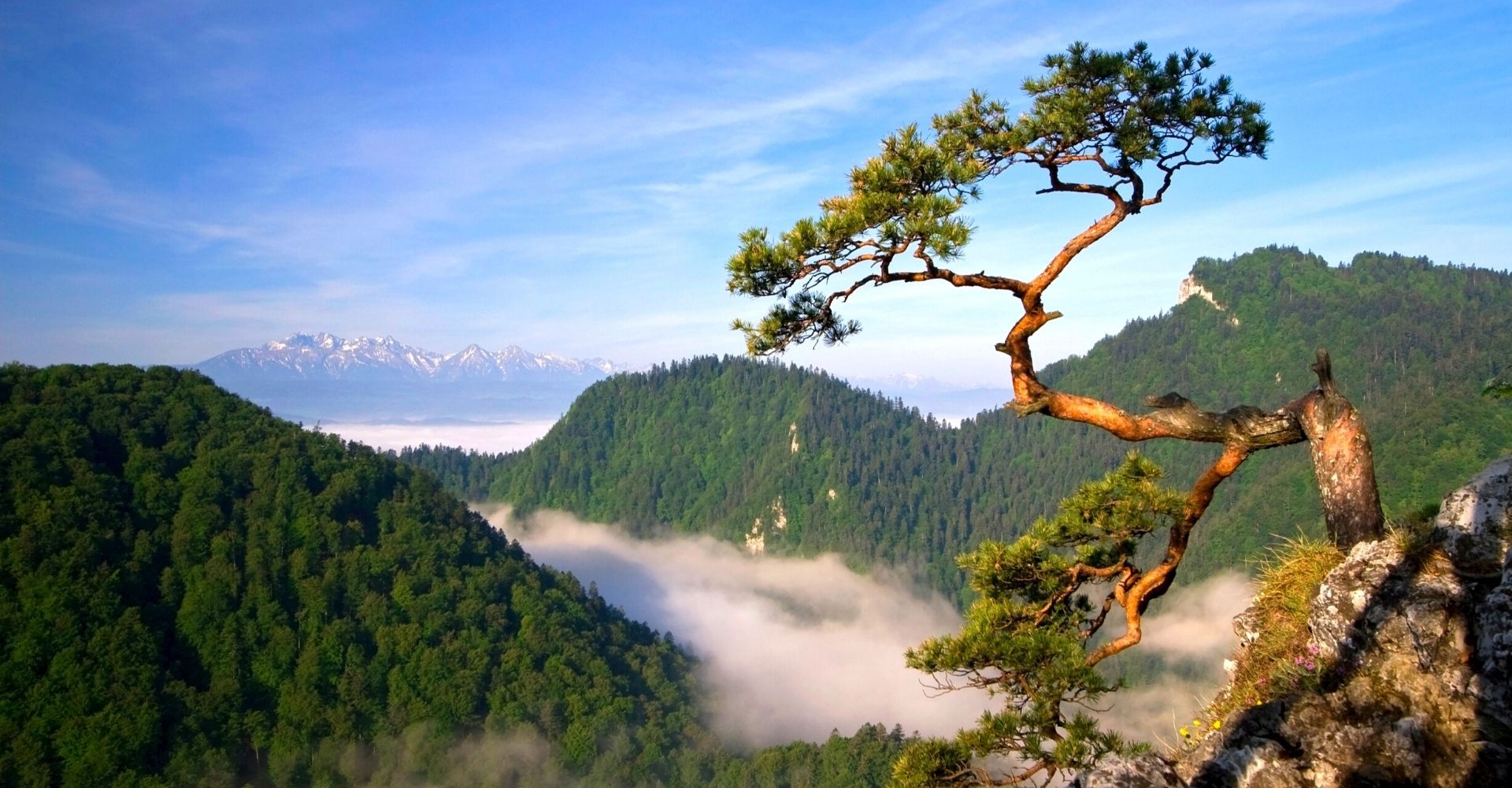 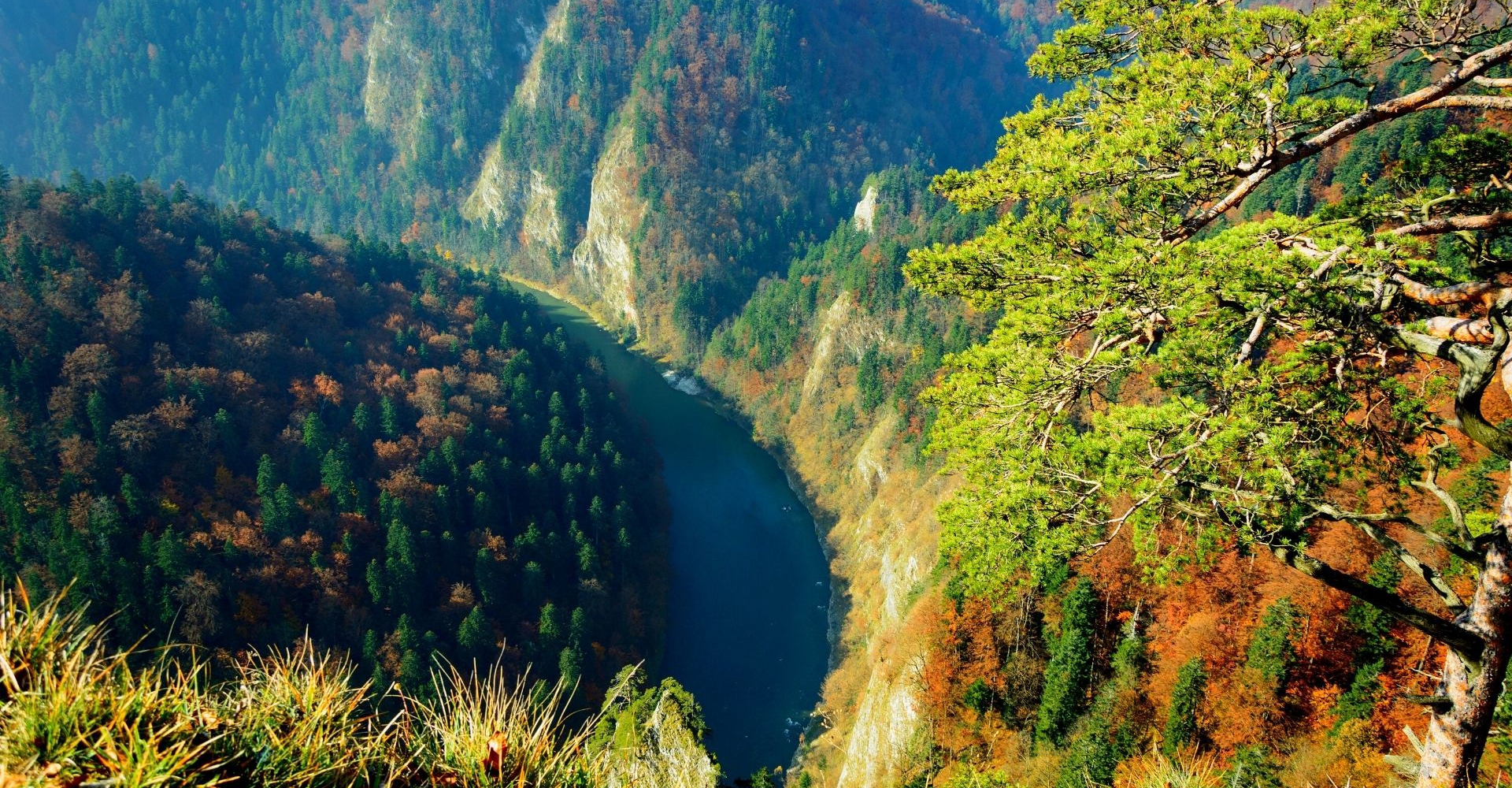 Pieniny mountains formed at the bottom of the sea in several geological epochs. They were folded and raised in Upper Cretaceous. At the beginning of the Paleogene geologic period a second wave of tectonic movements took place causing a further shift. The third wave of movements during the Paleogene and Neogene resulted in a more complex tectonic structure. At the same time erosion resulted in stripping of the outer mantle rocks and further modeling of terrain. Peaks were built from weather resistant Jurassic rocks, mainly limestone. Valleys and passes were created from softer and more susceptible to weathering rocks of Cretaceous and Paleogene periods. Caves are few and rather small. By contrast, rivers and streams are often deeply indented in the rock, creating approximately 15 ravines and gorges. The most famous gorges of the Pieniny mountains are the Dunajec River Gorge in Pieniny National Park and the Homole Ravine (Polish: Wąwóz Homole). Hills along the northern border of Pieniny are of volcanic origin.