Past and Future – A Must Visit

Poland is famous for its beautiful small and romantic towns as well as the most famous main cities. Teutonic knights, Polish kings and queens, majestic castles, Gothic side streets, sprawling market squares, snow-tipped mountain settings and a glaring absence of Warsaw make the list of Poland’s  most beautiful towns: a must-see for anyone visiting Poland

Warsaw is the capital and largest city of Poland. It stands on the Vistula River in east-central Poland Warsaw’s palaces, churches and mansions display a richness of color and architectural details. Buildings are representatives of nearly every European architectural style and historical period. The city has wonderful examples of architecture from the gothic, renaissance, baroque and neoclassical periods, all of which are located within easy walking distance of the town centre.

In 2012 the Economist Intelligence Unit ranked Warsaw as the 32nd most liveable city in the world. It was also ranked as one of the most liveable cities in Central Europe. Today Warsaw is considered an “Alpha–” global city, a major international tourist destination and a significant cultural, political and economic hub. Warsaw has also been called “Eastern Europe’s chic cultural capital with thriving art and club scenes and serious restaurants” 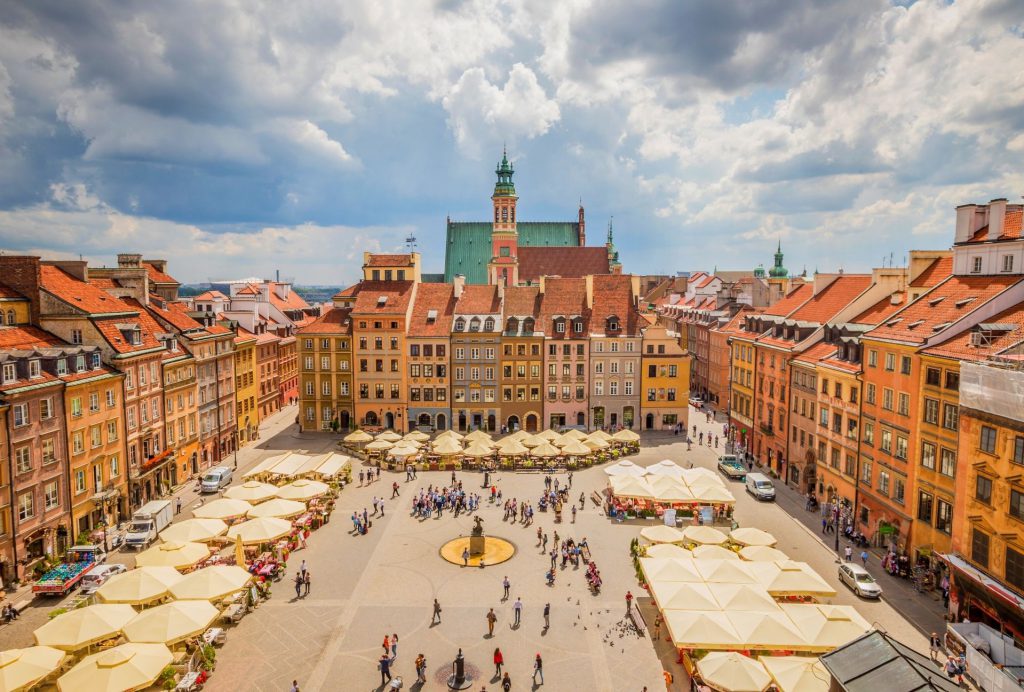 Kraków is the second largest and one of the oldest cities in Poland. Situated on the Vistula River in the Lesser Poland region, the city dates back to the 7th century. Kraków has traditionally been one of the leading centres of Polish academic, cultural, and artistic life and is one of Poland’s most important economic hubs. It was the capital of the Crown of the Kingdom of Poland from 1038 to 1569; and the Polish–Lithuanian Commonwealth from 1569 to 1795.

With the establishment of new universities and cultural venues at the emergence of the Second Polish Republic in 1918 and throughout the 20th century, Kraków reaffirmed its role as a major national academic and artistic centre. The city has a population of approximately 760,000, with approximately 8 million additional people living within a 100 km (62 mi) radius of its main square. 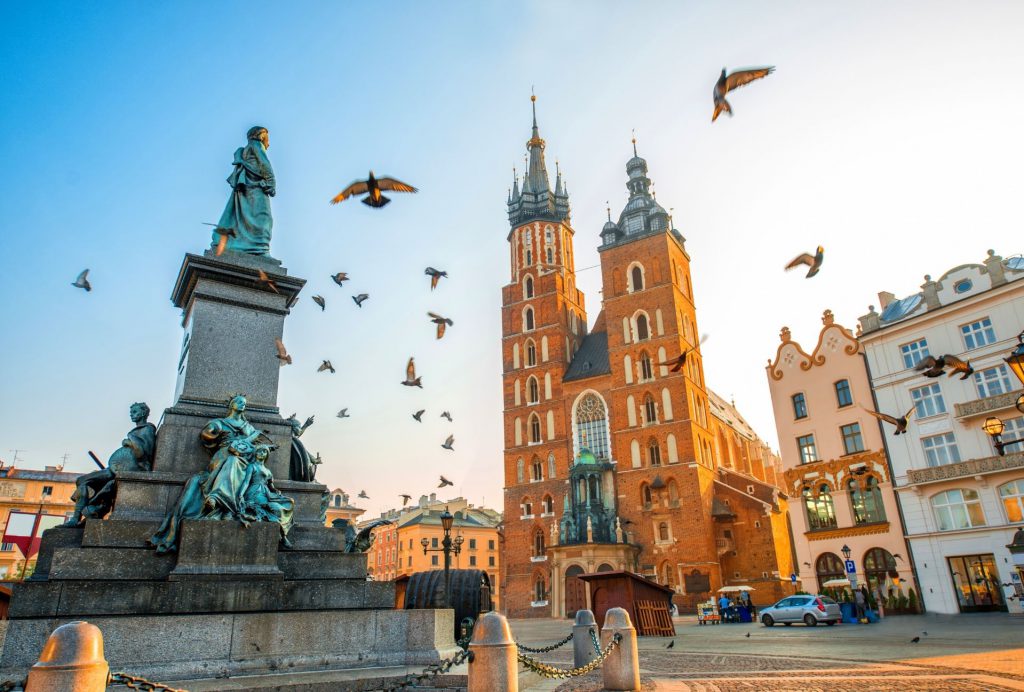 After the invasion of Poland at the start of World War II, Kraków became the capital of Germany’s General Government. The Jewish population of the city was forced into a walled zone known as the Kraków Ghetto, from which they were sent to German extermination camps such as the nearby Auschwitz never to return, and the Nazi concentration camps like Płaszów.

In 1978, Karol Wojtyła, archbishop of Kraków, was elevated to the papacy as Pope John Paul II — the first Slavic pope ever, and the first non-Italian pope in 455 years. Also that year, UNESCO approved the first ever sites for its new World Heritage List, including the entire Old Town in inscribing Cracow’s historic centre. Cited as one of Europe’s most beautiful cities, its extensive cultural heritage across the epochs of Gothic, Renaissance and Baroque architecture includes the Wawel Cathedral and the Royal Castle on the banks of the Vistula river, the St. Mary’s Basilica and the largest medieval market square in Europe, the Rynek Główny. Kraków is home to Jagiellonian University, one of the oldest universities in the world and traditionally Poland’s most reputable institution of higher learning.

In 2000, Kraków was named European Capital of Culture. The city hosted the World Youth Day in July 2016. 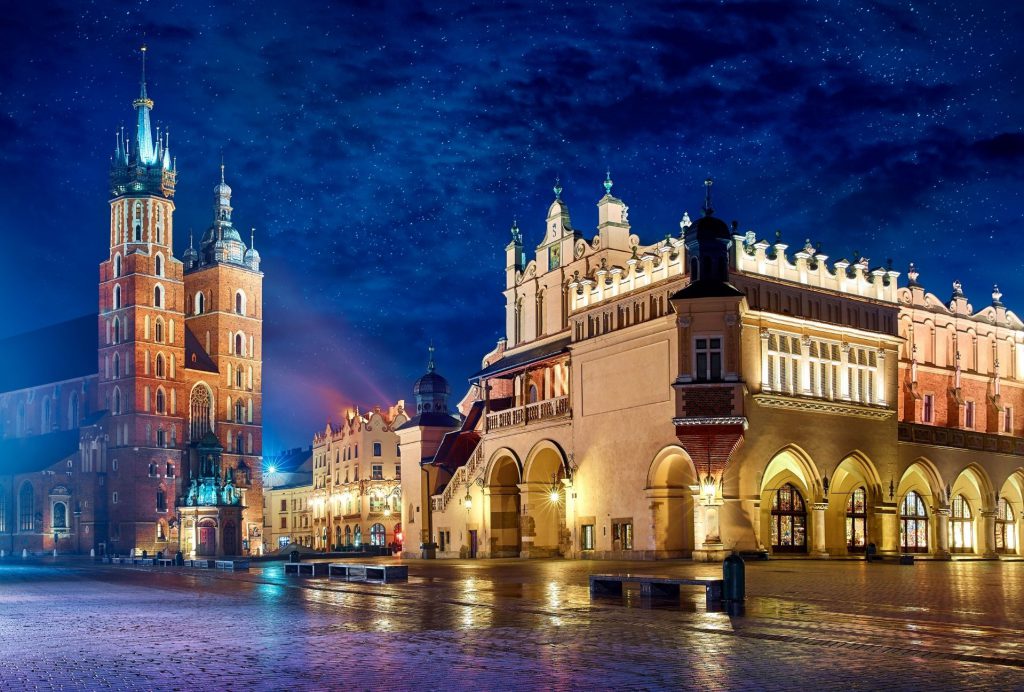 Gdańsk city on the Baltic coast, the capital of the Pomeranian Voivodeship, Poland’s principal seaport and the centre of the country’s fourth-largest metropolitan area.

The city lies on the southern edge of Gdańsk Bay (of the Baltic Sea), in a conurbation with the city of Gdynia, spa town of Sopot, and suburban communities, which together form a metropolitan area called the Tricity (Trójmiasto), with a population approaching 1.4 million. Gdańsk itself has a population of 460,427 (December 2012), making it the largest city in the Pomeraniaregion of Northern Poland. 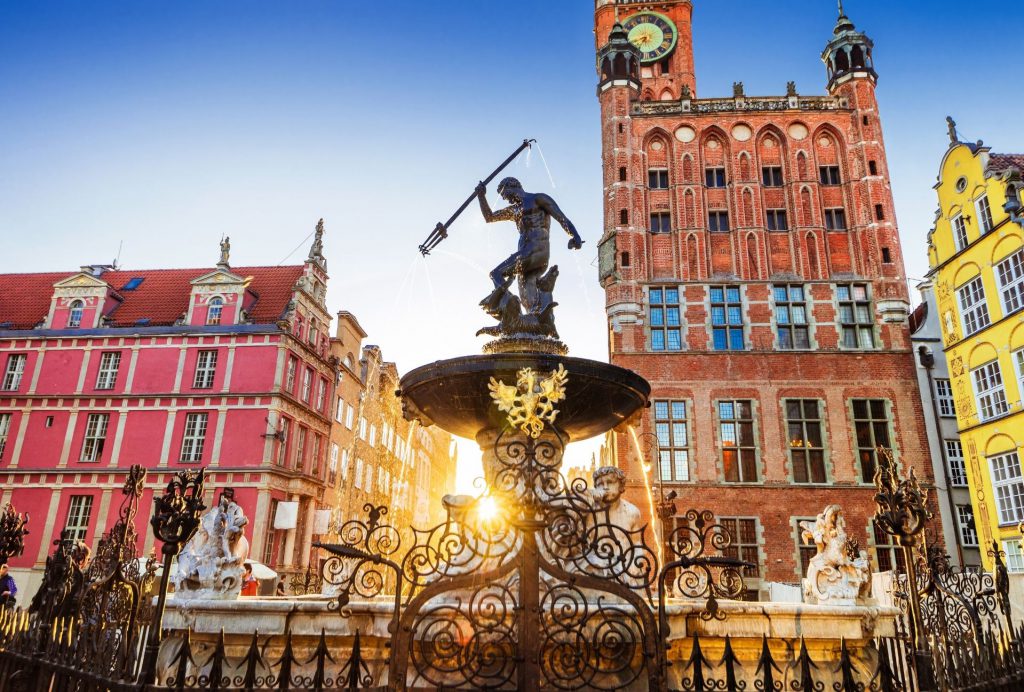 Gdańsk is the capital of Gdańsk Pomerania and the largest city of Kashubia. The city’s history is complex, with periods of Polish rule, periods of Prusso-German rule, and periods of autonomy or self-rule as a “free city”. Between the world wars, the Free City of Danzig was in a customs union with Poland and was located between German East Prussia and the so-called Polish Corridor.

Gdańsk lies at the mouth of the Motława River, connected to the Leniwka, a branch in the delta of the nearby Vistula River, which drains 60 percent of Poland and connects Gdańsk with the Polish capital, Warsaw. Together with the nearby port of Gdynia, Gdańsk is also an important industrial center. In the late Middle Ages it was an important seaport and shipbuilding town, and in the 14th and 15th centuries a member of the Hanseatic League.

Five centuries later, Gdańsk was the birthplace of the Solidarity movement, formed in 1980, which played a major role in bringing an end to Communist rule in Poland and helped precipitate the collapse of the Eastern Bloc, the fall of the Berlin Wall and the dissolution of the Soviet Union. 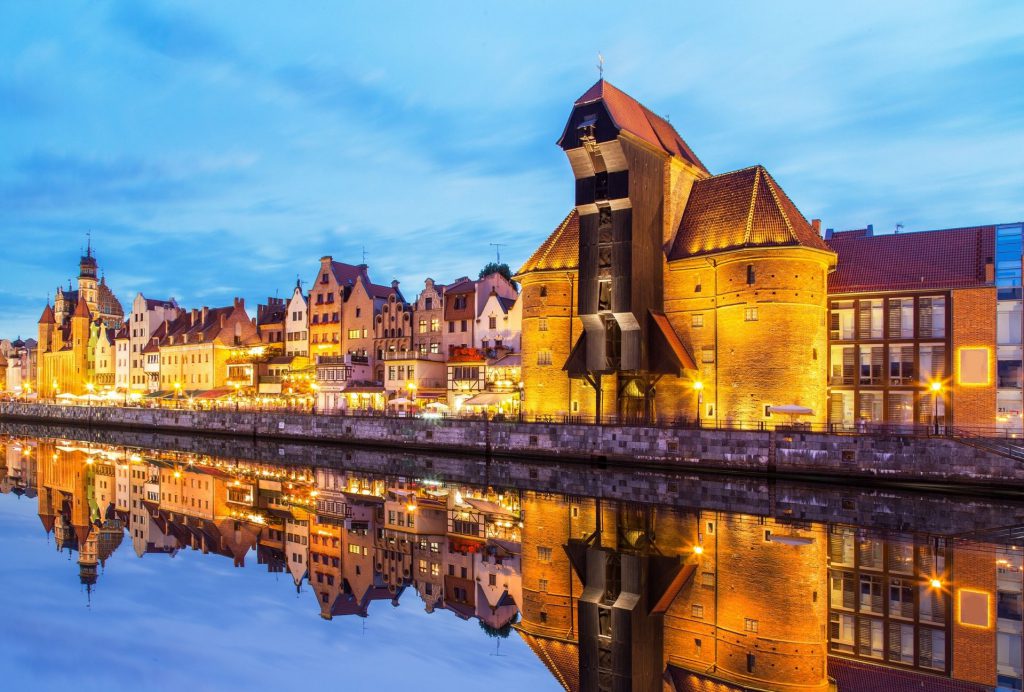 Wrocław is the largest city in western Poland. It is on the River Oder in the Silesian Lowlands of Central Europe, roughly 350 kilometres (220 mi) from the Baltic Sea to the north and 40 kilometres (25 mi) from the Sudeten Mountains to the south. Wrocław is the historical capital of Silesia and Lower Silesia. Today, it is the capital of the Lower Silesian Voivodeship. At various times in history, it has been part of the Kingdom of Poland, Bohemia, Hungary, the Austrian Empire, Prussia, and Germany. It became part of Poland in 1945, as a result of the border changes after the Second World War. The population of Wrocław in 2015 was 635 759, making it the fourth-largest city in Poland and the main city of Wrocław agglomeration. 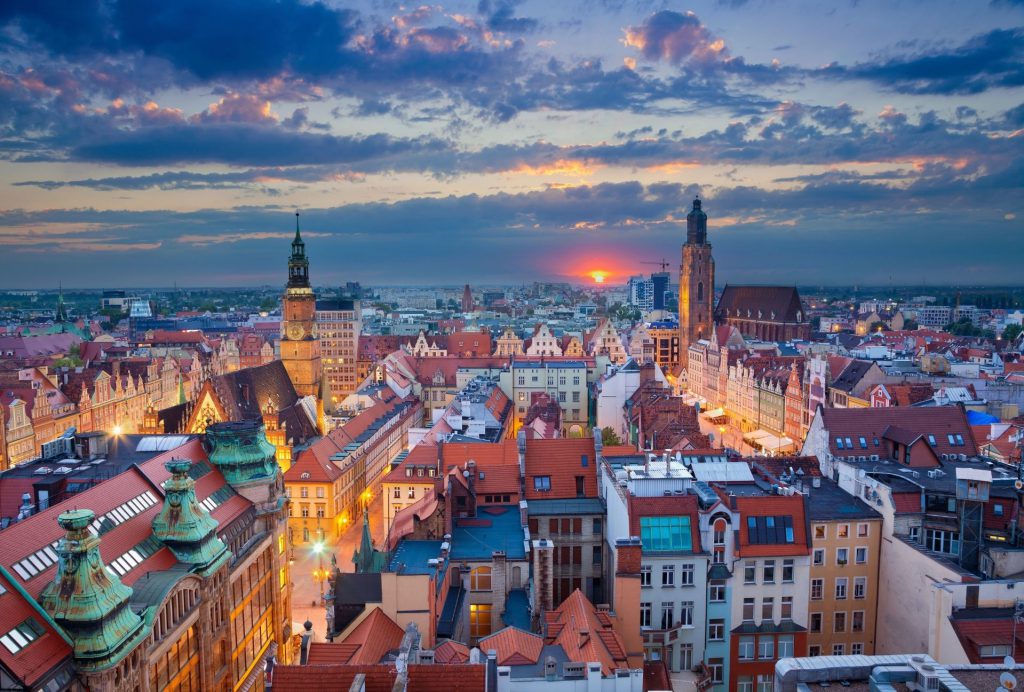 Wrocław is classified as a global city, with the ranking of high sufficiency and living standard. It was among 230 cities in the world in the ranking of the consulting company Mercer — “Best City to Live” in 2015 and the only Polish city in this ranking has been recognised as a city growing at the business centre.

The city’s name was first recorded as “Wrotizlava” in the chronicle of German chronicler Thietmar of Merseburg, which mentions it as a seat of a newly installed bishopric in the context of the Congress of Gniezno. The first municipal seal stated Sigillum civitatis Wratislavie. A simplified name is given, in 1175, as Wrezlaw, Prezla or Breslaw. The Czech spelling was used in Latin documents as Wratislavia or Vratislavia. At that time, Prezla was used in Middle High German, which became Preßlau. In the middle of the 14th century, the Early New High German (and later New High German) form of the name, Breslau, began to replace its earlier versions.

In 2016, the city is a European Capital of Culture and the World Book Capital. 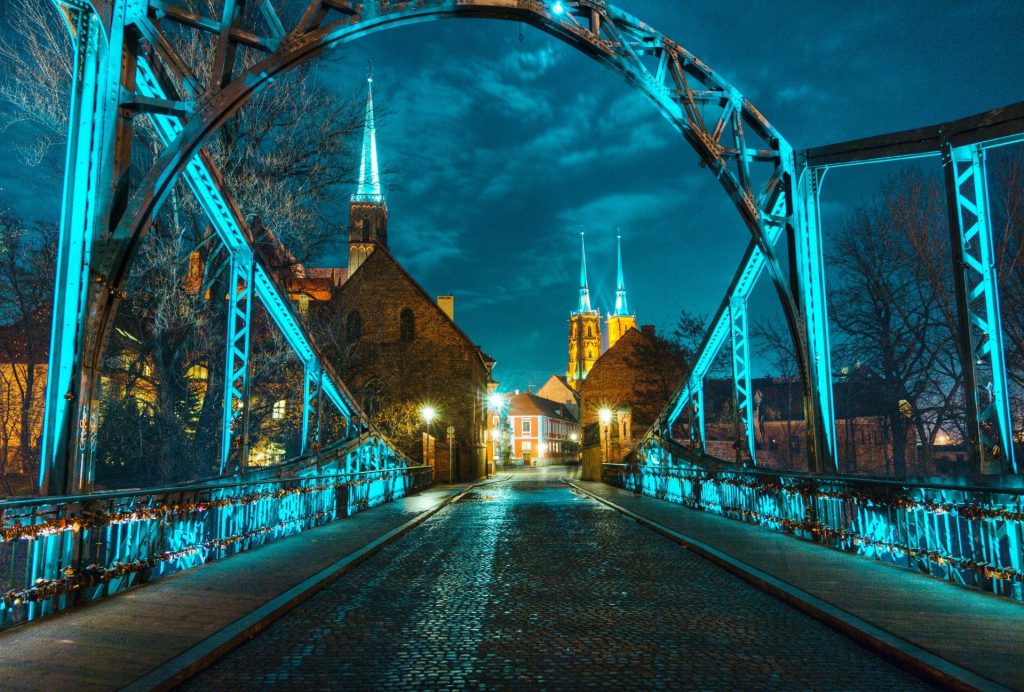 Zakopane is a town in the extreme south of Poland. It lies in the southern part of the Podhale region at the foot of the Tatra Mountains. From 1975 to 1998 it was in Nowy Sącz Province, but since 1999 it has been in Lesser Poland Province. It had a population of about 28,000 as of 2005. Zakopane is a center of Góral culture and is known informally as “the winter capital of Poland”. It is a popular destination for mountaineering, skiing, and qualified tourism.

Zakopane is located in southernmost Poland near the border with Slovakia. It lies in a valley between the Tatra Mountains and Gubałówka Hill. It can be reached by train or by bus from district capital Kraków, which is about two hours away. Zakopane has an elevation of 800-1,000 meters above sea level. The town is centered at the junction of Krupówki and Kościuszko Streets.

The earliest documents mentioning Zakopane date to the 17th century, describing a glade called Zakopisko. In 1676 it was a village of 43 inhabitants. Zakopane became a center for the region’s mining and metallurgy industries; in the 19th century, it was the largest centre for metallurgy in Galicia. It expanded during the 19th century as the climate attracted more inhabitants. By 1889 it had developed from a small village into a climatic health resort of 3,000 inhabitants. Rail service to Zakopane began October 1, 1899. 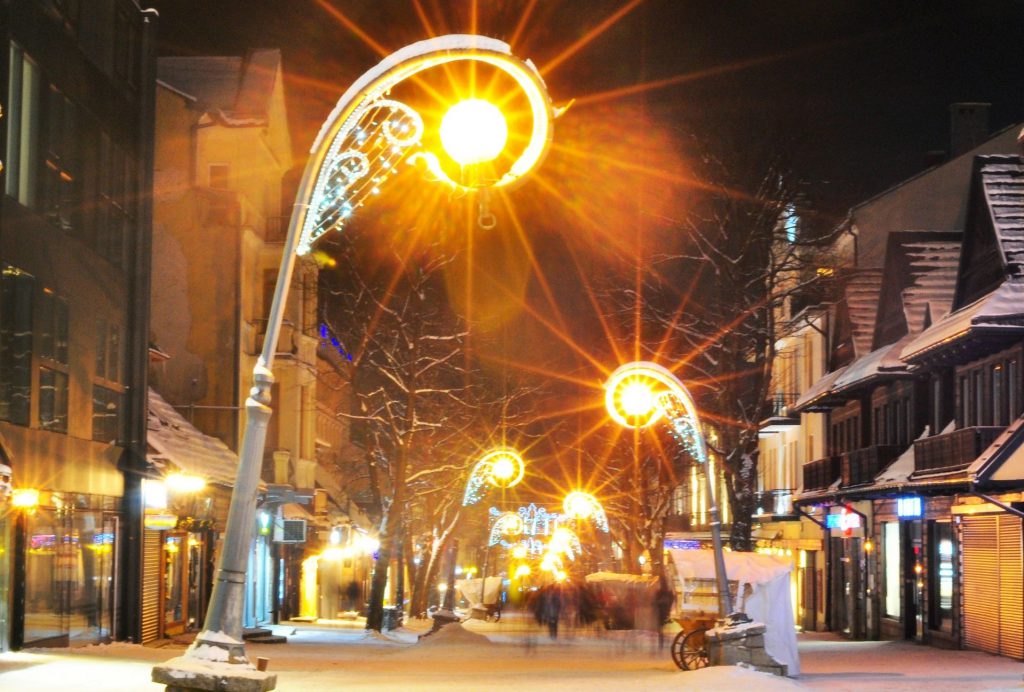