The Pearl of the Polish wildlife

Włodzimierz Stachoń – lives and works in Gromnik (Tarnów county). For almost 25 years, he has been involved in nature photography and journalism. Over 5,000 photographs of his authorship have been published in over 20 national magazines (nature, forest, fishing, hunting, sightseeing and others). The next thousand photos  can be found on the pages of six albums showing the beauty of nature in south-eastern Poland. More about the author’s creative work on www.wlodzimierzstachon.pl  on the profile of Karpaty – Magiczna Kraina.

In the mountains, one can say that there is winter almost every year, however, in other areas different things happen. Regardless of the intensity of the phenomena typical of the winter season, there comes a time in nature (approximately from November to March) when animals compete more intensively with one another for food, since at that time there is much less of it than in other times of the year. Food competition intensifies with the advent of snow and frost. Attracting numerous amateurs, the food found then is the cause of arguments and often spectacular skirmishes, which are probably the easiest to be observed among some birds of prey. Perhaps the behaviour of common buzzards would be the best example of this type of winter habit. These birds not only look for live prey in winter, but also eagerly eat carrion, which they can locate surprisingly quickly in their vicinity. Since such a discovery is usually announced to all and sundry with a characteristic exhortation, other winged competitors appear soon after the food is found.

This is when spectacular fights most often occur. They are not dangerous for the birds, but delay the satisfaction of their appetites. The moments when common buzzards fight is not time wasted in nature. They create occasions for other birds to catch a bite of nutritious food – on these cold winter days it can save their lives. With a bit of luck, less common species can also be observed near the carrion. Sometimes an easy prey will attract the majestic white-tailed eagle or a trained eye will spot a newcomer from the north, a rough-legged buzzard, flying among common buzzards. Yet other times, a Northern goshawk, which usually leads a secret life under the cover of the forest, will sit in front of the camera lens. For a nature photographer stuck in the frost in the hideout, these are the moments that allow you to forget about the inconvenience and freezing cold. They are inseparable companions of winter photos taken from hideouts. 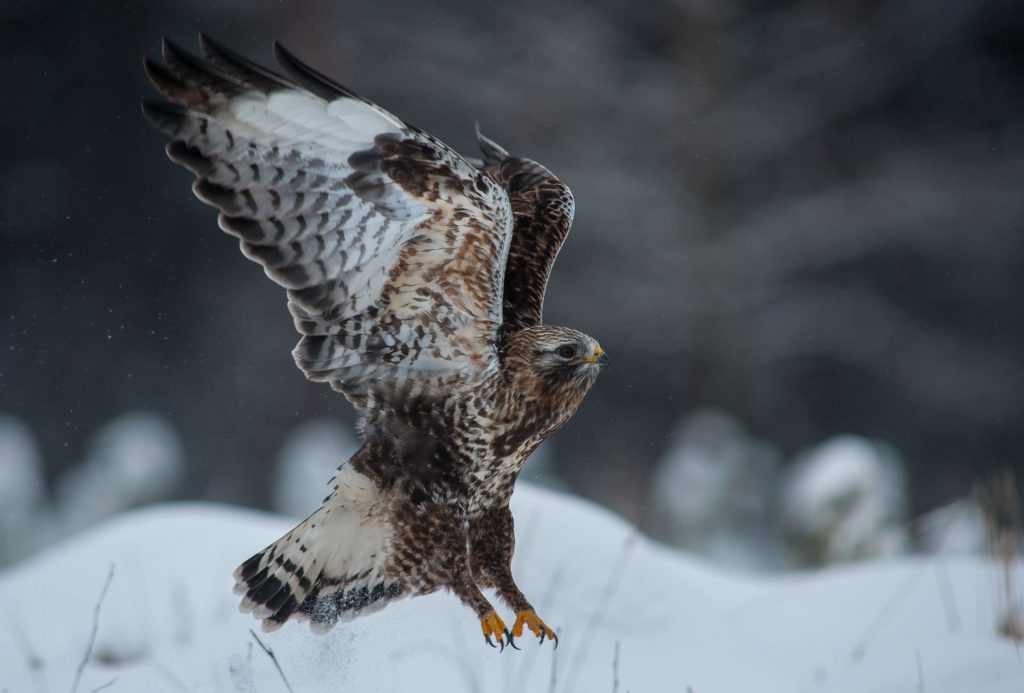 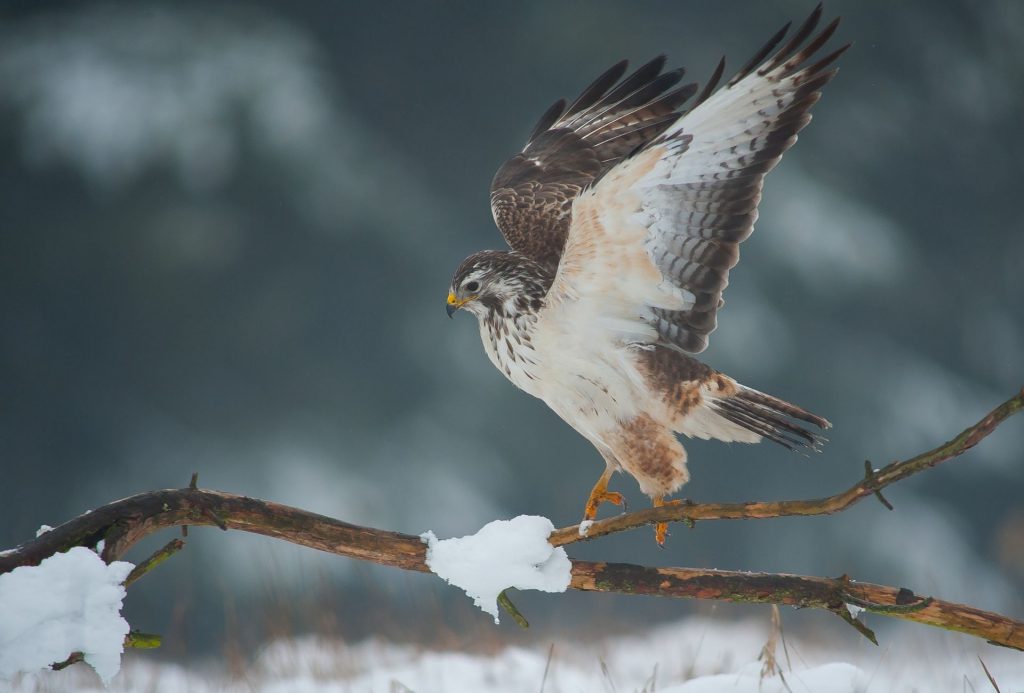 Most of the birds that decide to migrate leave our country between September and November. However, for some of them, Poland is the final destination. Although we will not see swallows and storks for a few winter months, other species occupy their place. Some of them can be observed even in the cities, especially in parks and gardens where they often look for food. To see a little more special species, however, you have to go to more secluded places where nature dominates over urbanised life. During the winter you can observe birds at feeders, to which you can lure over 20 species, including such rarities as the hawfinch, bullfinch, brambling. At this time, we are also visited by the birds which cannot be seen at any other time of the year, as waxwings or bramblings. Winter is also a great time to photograph birds of prey. White-tailed eagles, buzzards.

On photo: Long hours spent in the hideout result in new photo shots of various species in different sceneries. One morning, during a snowstorm, a common buzzard appears in front of the lens. Another time in the same place, I photograph a much less common visitor from the north, a rough-legged buzzard. 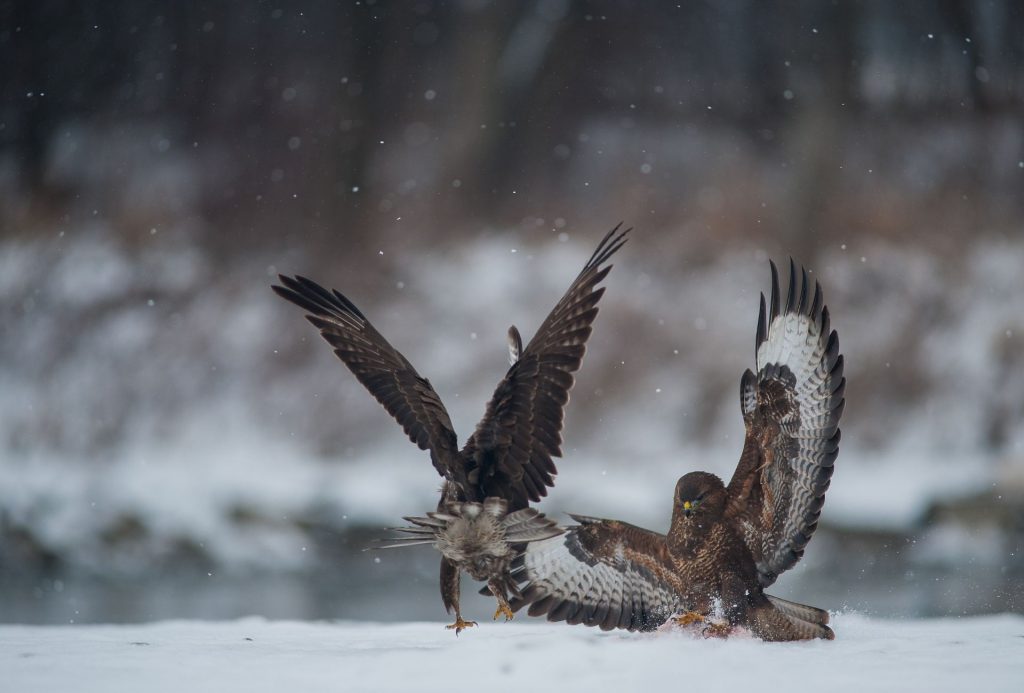 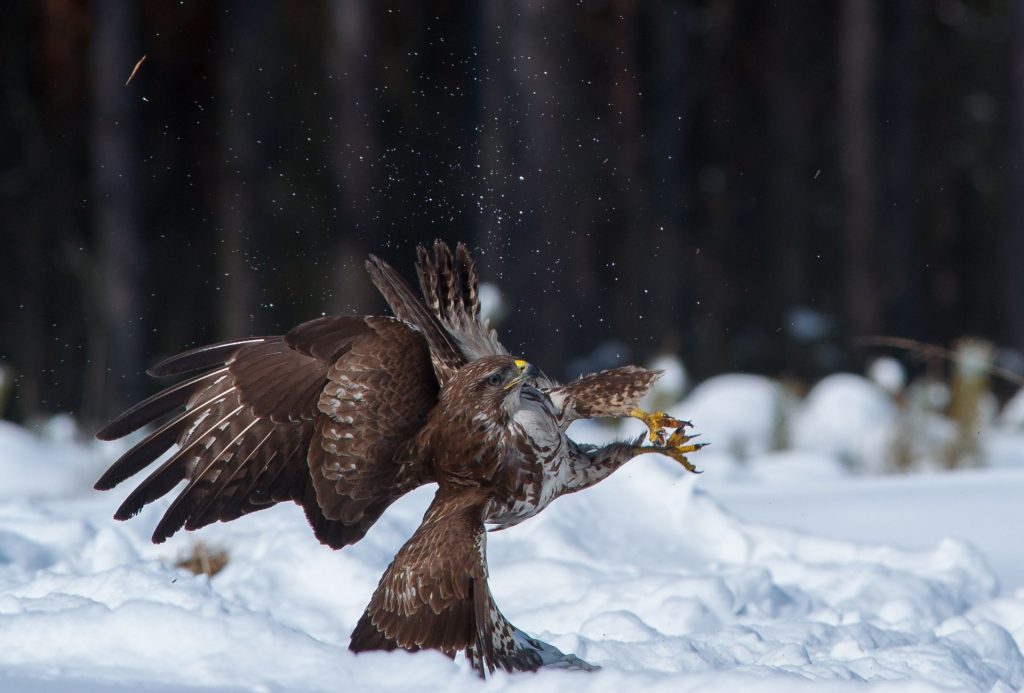 If you enjoyed reading this story, then we'd love it if you would share it!